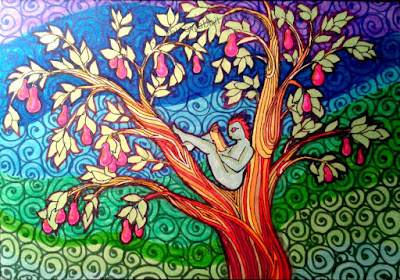 
I by no means refer myself as 'an author' but in between creating art I write short stories. From about the age of 6 after being handed a copy of 'Those Dreadful Children' (Enid Blyton) by my big sister which I devoured, unhearing my mother's call for dinner, I wanted a typewriter so I could write stories. I think I had the impression that stories unfolded themselves when the keys were hit. Yeah.

So, I'm going to share a short story I wrote last year. Most of the stories I've written in recent years have been about my life, as a child in the heart of the Co.Tyrone countryside or in the nearby town. The stories have my perspective of life and I'm sure my siblings, if they were to write about the same events, would write from a very different perspective. That's the beauty of a story, it can have many facets.

The stories were written to be recited before an audience at the Black Box theatre in Belfast as part of the tenx9 events and at the Lyric Theatre as part of Bounce! festival. I feel something is lost unless you hear the sounds of a soft Co.Tyrone accent which I'm told I lapse into when reading them aloud. I hope to attach a recording of them to my blog but that's something I need to work out how to do. But for you and my friends in the Deaf community, I hope my written words convey some of what I feel.

The Gift
performed at the Black Box

I had 2 good parents. My mother hailed from Ireland, my father from Australia.

My mother told us tales of growing up near a border town. Of walking dusty roads to school barefoot in the Summer and of making butter in the churn. My father told us stories of plucking ripe oranges from the trees and of seeing flocks of brightly coloured budgerigars. Our mother's stories might have been from a different time yet they seemed familiar. But my father's tales to the imagination of a Northern Irish child were nothing short of wondrous. Any other colour than the usual crow black and speckled brown thrush was exotic. Like hearing picture books coming to life.

My brother, five years older, spent time with me as close siblings do, making up games, squabbling and also sharing. He had a big red trike with a bell and a storage box at the back. He was kind enough to wheel it up to the top of the rise of our country road, encourage me to climb up, to hold on tight before he let go. Off I went, my legs sticking out at either side, too short to control the pedals, my knuckles white around the handlebars and my screech trailing behind me in the air like a loosened ribbon. The big hedge beside the henhouse saved me.

I was 6 years old and Christmas was coming. I could expect a generous gift plus some smaller surprises. And I believed in Santy with all my heart and soul. The purveyor of children's dreams. I had been very good for the previous few weeks, doing what I was told with determined steadfastness. No one had to tell me twice to bring my plate to the sink, I was offering to do chores, I had tried my hardest not to quarrel with my brother. A light shone from around my head. I was an angel. I wasn't being left a lump of coal in my sock.

Thanks to my big sister's encouragement I had begun to read Enid Blyton books. Engrossed, often beyond hearing my name being called, I became lost in tales of families different to mine. I wanted to write stories. Someone must have mentioned I would need a typewriter. Imagining my stories would unfold as I pressed the lettered buttons, I would ask Santy for a typewriter.

I talked and talked about how I was getting a typewriter for Christmas. I had seen one and explained how it needed paper and an 'inked ribbon'. The latter I wasn't sure about as the only ink I knew of came in a bottle. Liquid blue. The typewriter would have a handle and knobs that turned. And a bell that dinged, a bit like my brother's tricycle. To this day I believe that I talked to my parents about the typewriter for weeks on end, if not months. That's what I remember. In reality I probably mentioned it in a flurry of excitement amongst a list of other perfect Christmas presents. I was a child and flitted from one idea to the next like a sparrow.

It was my mother's task to take me to see Santy. She drove me into Omagh where he could be found waiting in Andersons Hardware shop. On the way she asked me what I would say. Did I know what I wanted for Christmas? Once again I talked about the typewriter, for hadn't I been telling her about it for weeks. She heard me out and then said,
"Remember to say 'and if you haven't any typewriters I'll take a budgie.' "
Startled, I protested, for I hadn't realised that Santy could possibly run out of things. But she insisted, rehearsing me as we drove along the road to town.

Past the shovels and the lawnmowers there sat Santy in his ruby red regalia. In the most magnificent wooden sleigh, painted blue and with white swirls along its side. The joy of climbing into it and sitting beside this bestower of gifts. Strands of tinsel twinkling and fairy lights glowing, Christmas tunes playing in the background. Assuring him I had been very good I told him what I would like for Christmas. I promised to leave the obligatory glass of sherry and mince pie. But out of the corner of my eye the magic wavered a little. I saw my mother nodding her head in encouragement and being the good child that I was I added 'and if you don't have a typewriter I'll take a budgie'. In hindsight, Santy must have looked at me askance. Many girls my age might have been satisfied with a doll.

Christmas morning arrived in a cold snowfall. I hardly took the time to pull on my dressing gown and slippers before running along the cold lino towards the warm kitchen. I scurried through the door and knelt down below the crib and the tree, the space around them piled with presents. And I looked and looked but the shape was wrong. It didn't look like a typewriter. Instead it looked like a cage and there was a small green bird inside that was cheeping at me.

Unbeknownst to me during one of our father's childhood stories, when I had exclaimed how much I wanted to see a budgerigar, a seed was planted in my father's mind. It involved him, 3 weeks before Christmas, driving 70 miles to a pet shop in Belfast and 70 miles home again. All for me. The gift was hidden in my father's workshop, away from my sight and hearing. The fun my parents and siblings must have had on Christmas Eve, encouraging me to go to sleep so that the gift could be brought into the big kitchen. With what joy they must have anticipated the look on my face when I would see the surprise the next morning. Roisin's wish was coming true.

No matter how long you stare at a bird in a cage it will not turn into a typewriter.

Our parents had brought the three of us up to be respectful. We were polite and well mannered. If you received a gift you said 'thank you'. So there were no tears or tantrums. It would be explained to me later that day what it was and where it hailed from and I would feel happier. It would become, over the next few years, a bone of contention between my mother and me, how often to feed it and clean its cage.

But then, that Christmas morning, I saw it clearly. My visit to Santy and the deal I had struck. At that moment some other little boy or girl had my typewriter and I had a green bird in a cage. With all the disappointment of a 6 year old I sighed heavily and declared aloud,
'I wish I'd never mentioned the aule budgie'.
© Roisin O'Hagan 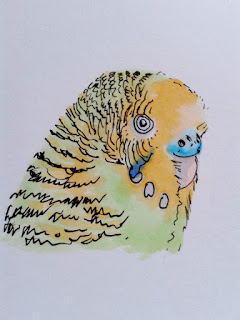