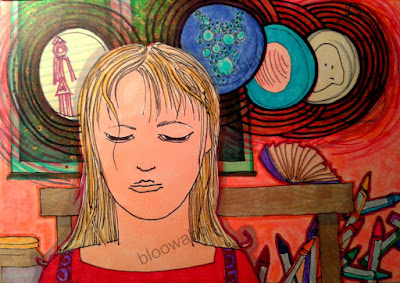 I've been into art all my life, since I was able to hold a pencil in my tiny hand. For years, a drawing I did when very young was kept in the family dictionary. It was a drawing on a piece of lined paper of an amorphous being. The blob had eyes and some stick-like protuberances which child psychologists might interpret as arms extending from a face, the parts of a loving parent that first imprints upon the child. Anyway, my Dad asked me what I had drawn and after some thought I said 'It's a snud'.

A few years on 'Tank Girl' joined the Snud in the pages of the dictionary. Tank Girl (not to be confused with Jamie Hewlett's and Alan Martin's late 80's comic strip) was drawn in red ballpoint. A tall figure made up of geometric shapes and lines. I had been sketching a concrete tank opposite the henhouse, got bored and took the ballpoint for a walk across the page. My older sister was at art college and when she went on to study education my drawings in the dictionary illustrated a small part of her obligatory paper on child art. 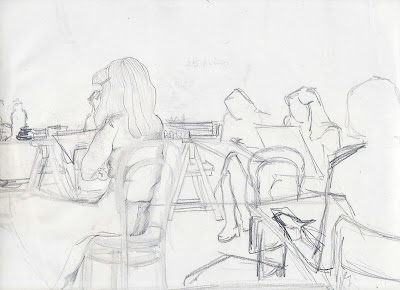 My future brother-in-law was my art teacher when I started grammar school and from 11th year onwards my sister taught me. I learned a lot from my big sis. Art was my passion and it was inevitable that I sit art O and A Levels and follow through to a place at Art College. Studio space, heating, lighting and small material grants took the pressure off producing coursework (this was the 70s & 80s when students were financially supported in their choices of further education). Working at college from noon until 10pm each evening, I was in my element. 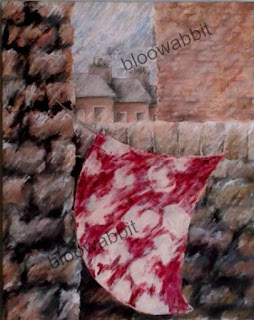 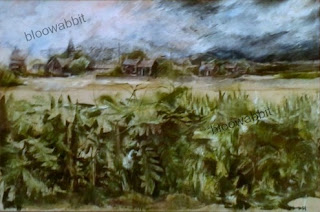 However, it was the late 1970s and Belfast was in the throes of civil war, bombs threatening everyday life in the city as well as across the rest of the country. There were students who focussed on political art but I painted emotive landscapes with turbulent skies in my first year moving into the escapism of fantasy illustration with words in second year.

My final year show in 1981 reverted to natural form. I had fallen in love with handmade paper, creating huge hangings depicting quirky plants and gourds. Sheets of translucent silk paper adhered to large watercolour pages stained with inks and latex fluid. The pieces were suspended on invisible fishing line allowing them to hang free from the walls so that they gently moved when the air in the room was disturbed by visitors.

It's a bit of a culture shock after 16 years within the education system to suddenly find yourself in the real world. What I could have done with was some direction, practical advice on how to continue producing art and earn a living doing so. But at that time there was no after-Uni support. I was twenty, quite naive and somehow had to get a job.

After 6 months of being unemployed, spending my mornings writing short stories (one being published in LIVE! fanzine), I was offered a year's employment working in a community centre as an Arts Assistant. I would have my own art room where I would run arts & crafts classes for after school kids and unemployed teenagers. 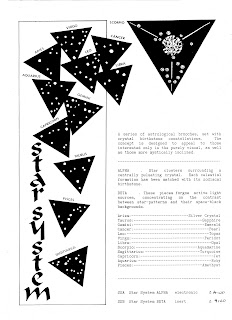 That following Summer I worked at a Youth Resource Centre as a Street Theatre Assistant. Running workshops on making simple costumes, hats and props while others worked at creating songs, dance movements and acrobatics. It was a Summer filled with sound and colour. My artwork had taken a backseat at this time. The paid work I continued to do was creative but I'd stopped focussing on myself as an artist. I ran 'Junk to Jewellery' evening classes in a local arts centre. I taught crafts in day centres. I taught machine knitting on a YTP scheme (Youth Training Programme). With two colleagues I ran an electronic jewellery business producing Swarovski set resin cast constellations back lit with LEDs. Occasionally I would take part in a group exhibition but I had lost momentum. Over the decade after leaving art college art was just something I occasionally did on the sidelines whilst earning a living.

I applied for and got a position in a large day centre working for adults with intellectual impairments. In the ten years I was there making art didn't feature at all. I concentrated on 'my career', got promoted and ended up unhappy, in a lot of stress which culminated in my becoming disabled and losing my job. I found myself unemployed, at home, a single parent with a young child. It's strange how life turns out. This life change became the restart of my path as an artist.


Copyright © 2016 by Roisin O'Hagan/bloowabbitAll rights reserved. The artworks/illustrations or any portion thereof may not be reproduced or used in any manner whatsoever without the express written permission of the artist except for specific permission granted with a free downloadable.