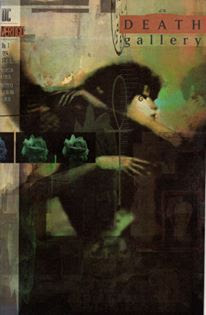 As well as a collection of Batman comics I have a few other series and individual comics plus graphic novels. The attached links lead to sites where the artwork is often of an adult nature.

In 'Death Gallery' Neil Gaiman writes about his image of the character 'Death' from The Sandman series and many other comics, plus within this single issue comic are illustrations on the character by a variety of artists. The initial design for Death was based on an American waitress called Cinamon Hadley although the character changes age as she appears from comic to comic.

Death, the punky female goth version, is slightly whimsical. Being a fan of the dark broody Batman you understand why I like Gaiman (and Tim Burton but that'll be a different blogpost). To quote www.soulcatcher.org 'His work is usually... unusual, quite dark, mystical without piety and, uh... Gloomy? But there's usually a touch of humor or light in his dark tales.'

I like the format of the comic, a collection of artworks by a group of artists on a common theme. Seeing the same character from a number of artistic viewpoints gives more insight to Death herself. My favourites have to be those by: Charles Vess, Jeff Smith and the late Joe Phillips.


Moonshadow is a great series by John M DeMatteis, evolved from 'The Compleat Moonshadow' and inspired by the song by Cat Stevens. The central character, Moonshadow, looks back over his life from his creation, his being orphaned, his loss of innocence and his friendship with the large and furry Ira.

I like the quality of the illustrations in the series. Moonshadow was the first American comic book to be illustrated with paintings, a change from the usual line and colour comic art. John J Muth has a beautiful style that portrays both the childlike and the adult themes in the story.

My series is by Vertigo (DC Comics), the first series having been published by Marvel Comics. As an addition and a final piece of the story 'Farewell Moonshadow' was brought out two years later. 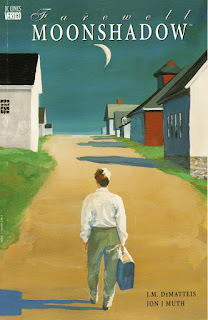 The final part of the Moonshadow story is a graphic novel in the form of a storybook, each double page having a full page image on one side and prose on the other. Reading it reminds me of being young, curled up with a good and interesting book with plenty of pictures. And yet the storyline and images here are from an adult mind with twists and turns, changing the fairytale of idyllic happiness into one of harsh realism, ending with a final twist of fantasy.

There's a great image of Bettina's Aunt Marigold painted like the late eccentric Margaret Rutherford. An online view of the entire story can be found at readcomics.net

I've only got the first two copies of Seekers. I can't remember if I just didn't get into the story or if I couldn't find the following comics in the series. The first 4 comics were illustrated by Glenn Barr and nos 5, 10 and 15 by John Muth. There's a nice contrast between the two artist's styles in the first pages of issue 1 and issue 15, the same 'when I was a boy' dreaming-about-flying layout. 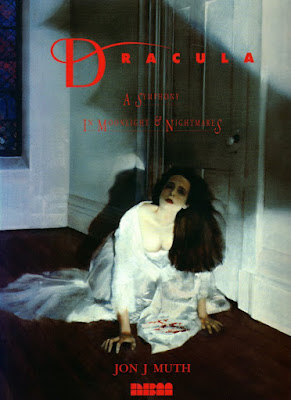 A reimagining of Stoker's tale through ephemera 'collected' from the time. Muth's beautiful illustrations keep the reader tantalised as the retelling of the original book wavers greatly from its path. A good addition to a Muth collection. 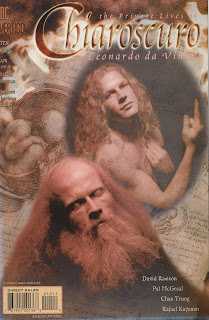 I bought the set of The private Lives of Chiaroscuro, a story of Leonardo da Vinci's life from the perspective of his young prodigy Salai (Little Devil) who didn't follow the same dedication to art as his master (to put it lightly). But it is a colourful way to follow the life of Leonardo and his history as a great painter and inventor.

I never liked the fine art photographic front covers even though they capture the effect of chiaroscuro in art, I bought the comics just for the story. 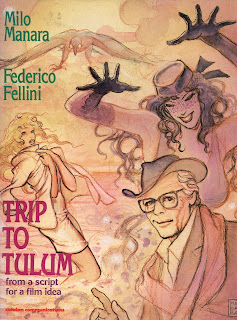 I love this graphic novel, it's one of my favourites. The bizarre fantasy within the story, or collection of happenings, is beautifully drawn by Milo Manara. The artist approached director Frederico Fellini to ask if he might create a graphic novel from the tale, inspired by the shamanic journeys of Carlos Casteneda. Fellini got involved with the creation of the novel, 'he intervened" especially in the final stages" in decisions about cropping, lighting and the characters' expressions.' - Vincenzo Mollica (the model for the blonde character).

It's the kind of book that can be picked up and read in its entirety or a single page read, allowing the imagination to focus. It's also an excellent visual source for an artist as it's filled with a multitude of fantastic images.

I might visit a comic book store sometime in the near future, to check out what's current and if I can find some original or reprinted morsels of Muth, DeMatteis, Gaiman or Manara.

Copyright © 2016 by Roisin O'Hagan/bloowabbitAll rights reserved. The artworks/illustrations or any portion thereof may not be reproduced or used in any manner whatsoever without the express written permission of the artist except for specific permission granted with a free downloadable.
Posted by Rois at 14:08