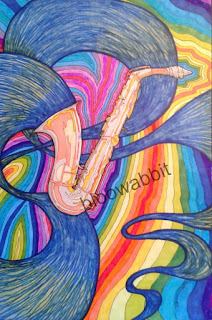 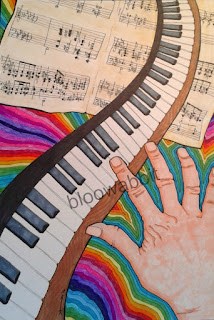 I set myself the task in February that each month I'd make at least one submission, either a piece of art or a short story I'd written. I thought it'd be an achievable goal, not too demanding, with up to 4 weeks every month to prepare something. And in March I met the challenge, sent off some artworks to Bennigans Bar Gallery in Derry. The theme given was 'chromatic' and as Bennigans is a music pub I could see the parallel between chromatic colour and chromatic scales.

Working towards a theme has pros and cons. It can be helpful to have a narrow framework from which to create. Or it can result in something forced if an image/storyline doesn't jump to mind. With the given theme I knew what I wanted to draw, had been looking at saxophones and was intrigued with the complication of their construction as well as the beauty of their shape. The piano is something dear to me as I learned to play it as a child and have recently started practising again. (love Bach, love Ravel, love Debussy)

I completed the artworks within three weeks and sent them, wrapped in a bubblewrap factory's entire stock of bubblewrap inside a large forest's worth of cardboard, overland by Ulsterbus all the way to Derry where the lovely Rebecca picked up the parcel. I didn't get to preview the exhibition but saw photos posted on facebook. I didn't sell anything - perhaps a more traditional approach might have fared better there. It's still worth testing a gallery space to get the feel of it. It is all part of the process of submission. 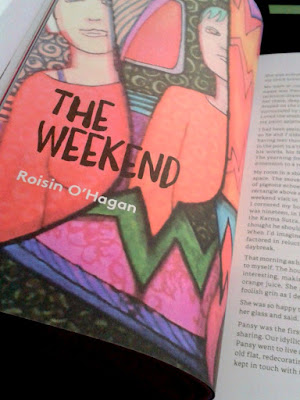 A short story I submitted in March 2015 took, understandably, a much longer process from submission to publication. It involved an initial acceptance with an agreement from me to allow some editing. Very little was changed, some grammar and two sentences that really didn't add anything to the story. A good editor is priceless, honing the story yet retaining the essence given to it by its author. I was entirely happy about the few changes made.

I'd also sent in some artworks to support my writing and although it was great to see my story illustrated the quality of printing wasn't wonderful. This is in part down to me sending in lower resolution images than desired, something to be wary of in the world of digital art. Every submission brings some learning.

The submission deadlines were extended which would affect the publication date but again, this is was a very acceptable delay as without the extension I might not have been included. By January 2016 I received a copy of the book containing my story and I felt jubilant. Plus, the book's compiler said some very decent remarks about my story and art in his press releases.

However...although I received a copy of the book I did not receive a fee. And this is a bone of contention among creative people. There's a saying 'you'll get great exposure' which at the end of the day really isn't worth much. You'd need to be moving in very high circles for that to have a positive effect on your earnings but those who are are in high places within the art or literary worlds have got there by charging for their work and being valued for doing so. By only accepting a hardbacked copy of the publication I not only did myself a disservice but did a disservice to others. The art worlds are being financially supported less and less every year. Each time we agree to do something for nothing we add to that lack of support. Next time I'll be asking for a fee.

Regardless of mistakes made it's important to get out there and seek opportunities in which to submit work. I've found by signing up for newsletters and blogs as well as reading national magazines on art & literature I keep abreast of what's happening. There have been times I've missed a submission deadline but the work I did for that gets sent elsewhere. Try not to take personally any rejections, it's not about you as a person, it's more likely it's that your work doesn't fit that particular gallery/publisher. Good Luck!!