Well, it's the Christmas season and there's an excuse for going sticker-mad in my planner. Over the last few months I've watched countless YT videos of layouts and hauls and resisted the temptation to buy. Even the amazing sticker kits from the US I have said 'No' to (the shipping can be pricey). Instead I settled for UK shop Plannable Designs on Etsy - love Melissa Holland's colour themes and velvety matte stickers, nice to write on.

I bought 3 full kits for December and a smaller kit for January. And I don't regret a single peel-off, stick-down penny. 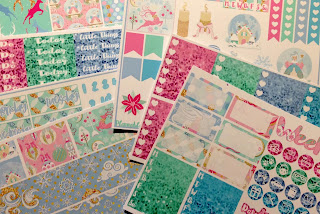 The first kit is called 'Swirling Snowglobe', gentle hues of blues, green and pink. Some of the full boxes and little things (plannerspeak) have the coveted 'glitter' effect which is on trend in the sticker world. 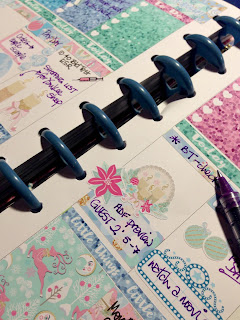 There's even a sticker with the words 'Life is like a snowglobe, sometimes things turn out prettier once they've been turned upside down'. (Do pageant contestants walk on their hands?) 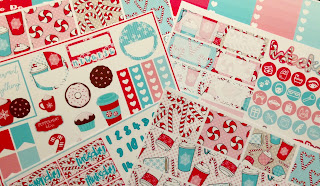 The second kit is called 'Peppermint Latte' and I wasn't sure about this set although I ended up preferring it to any of the other December kits. Raspberry red, turquoise, stone and pink. 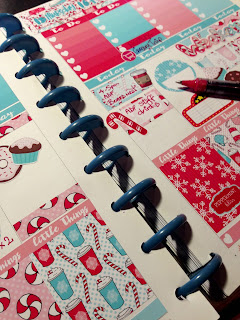 The sticker with words reads 'Peppermint Everything'...
I have a friend who has always smoked menthol cigarettes and in a bid to transform regular cigarettes into menthol she bought a small bottle of menthol crystals from the local chemist in which to dip them. It worked. But the bottle cap unscrewed inside her handbag and the crystals spilled out. Even after cleaning out the handbag she didn't realise how absorbent tampons are...I'll leave the rest of the story to your imaginations. So no, don't peppermint everything. 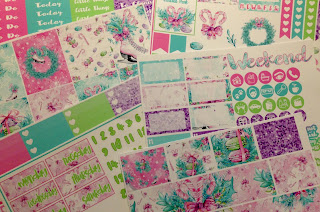 The third kit is called 'Skating in Central Park', lilac, teal, lime green and pink. It's full of delicately drawn clip-art which is put together very nicely. 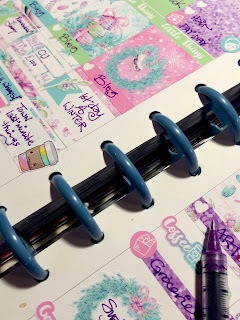 The sticker with words reads 'Dreaming of Skating in Central Park'. That's an image used in many films and is one of those Christmassy scenes. I dream of being able to skate and if I could then Central Park would be on my bucket list of places to go. 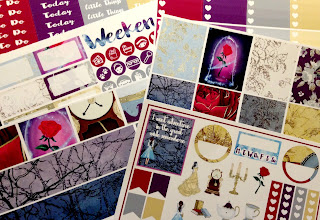 The fourth set which I've used in the January section of my planner is called 'Break the Spell' and has purple, dark red, grey and pale gold. These stickers are all about Belle from Beauty and the Beast. I love them because Melissa has created the original dark version of the tale upon which the new film is based. Disney has a lot to answer for by dumbing down and sweetening the great historical fairy tales that have scary bits in them. Read 'The Uses of Enchantment, The Meaning and Importance of Fairy Tales' by Bruno Bettelheim (child psychologist). 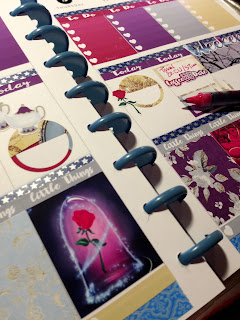 There's a sticker with words which reads 'I want adventure in the great wide somewhere' which I presume is a quote from Belle and which isn't a bad attitude to have.

Beautiful stickers and a well decorated planner. So now I've no stickers left and already I'm having to resist Etsy. I do have white printing sticker paper and I could look up Victoria Thatcher - she does free downloadables... there's a nice retro kit I've my eye on... (sounds of printer warming up and scissors opening and closing)...

Copyright © 2016 by Roisin O'Hagan/bloowabbit
All rights reserved. The artworks/illustrations or any portion thereof may not be reproduced or used in any manner whatsoever without the express written permission of the artist except for specific permission granted with a free downloadable.
Posted by Rois at 09:26