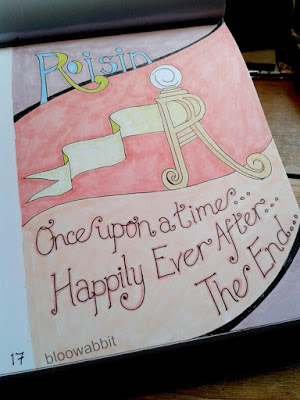 As well as drawing I also write. My time is not equally split between the two artforms but although I draw most of the time, every other day, the writing comes in waves and then seems to recede. I'm okay with that, I write when I need to or am consumed with a story that must be written down. The words will then tumble from me over the keys onto the screen and are edited again and again until I'm happy with how it reads. I speak them aloud to myself because the sound of them is as important as how they read silently in my head. 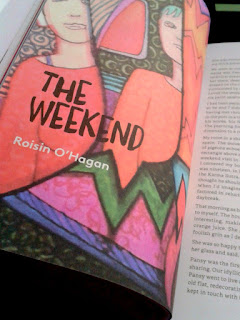 illustration and story in 'Bold'

At the beginning of this year I received a copy of an anthology which included a short story of mine - Art & Literary Submissions - and haven't had anything published since then. 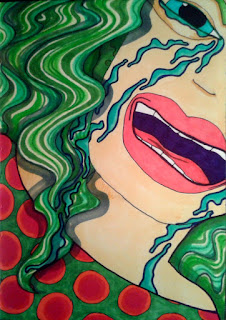 Three short stories were written for Tenx9 at the Black Box but I didn't get down to the theatre to read any of them aloud. The first, Ageing, covered the life of my father and his personality change after having a series of strokes. And the 2nd, Mental, touched on mental health, raw, uncut and terrifying. There's a cathartic effect when you write about your own life and about the lives of those connected to you. A Cognitive Behavioural Therapist once told me that standing before a group of people to read aloud something about yourself can be a healing release of emotions previously contained or hidden. I found that by reading my stories at Tenx9 I unburdened something, even if that story had humour. The third story entitled Fear did have humour, set at the end of college when my grant had run out and I hadn't yet got a job or claimed benefits. 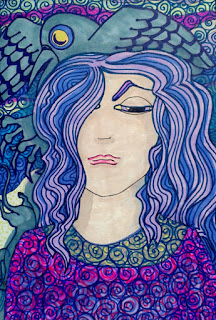 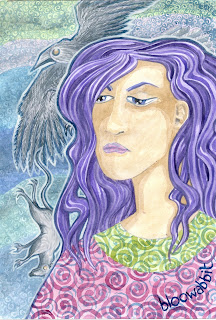 I then wrote The Crow, a very short story about a vision or imagining I'd had. A powerful unburdening of negative emotions (always good to do). Sometimes the story dictates its length and you just can't extend or shorten it without altering its integrity. I did place this for submission in the Mslexia short story competition. 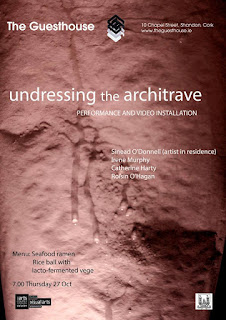 An interesting project, undressing the architrave, which involved me illustrating the writings of another resulted in my artwork being included in the event at The Guesthouse in Cork, Eire. It was interesting to complete work based on Sinead's writing which was very different to mine and which threw up such vivid images in my mind. There's some discussion about a selection of the writings and drawings being included on an Arts website - I'll link that when it happens. 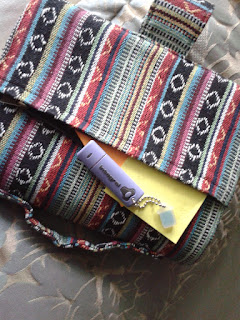 Other bits and pieces I've written since January are for a novel I started two years ago. I had begun the story when I was fourteen and in 2014 I began to knit together a more cohesive tale. My PC wasn't working and I hadn't yet bought a laptop so I wrote it longhand. Later, on a laptop, I began to edit and reduce what I'd written to two-thirds of what I'd had. It totals 40k+ words and there are a few chapters in the middle which although have been planned have yet to be written. This year I haven't spent as much time on it but now and again a scene jumps to mind and I write it up. If I make a conscious effort to make a change next year it'll be to set time aside for this project.

I attach a little from the beginning of the story below, omitting some phrases and descriptions as they paint the setting and the culture of the characters (I'm not ready to share all yet). Unsure of how to publish a 'long' story I've been giving some thought to presenting this tale as a weekly comic strip...

In a room hewn from rock its crystalline walls sparkled from the many candles. The Official Birthing Sister, Fortura, stood over a woman in a chair whilst calling instructions, demanding obedience. The woman, heavily pregnant and about to give birth, sat in the ornate chair like an uncomfortable queen. Her long red hair, lank with perspiration, shrouded her face as she dropped her head with weariness. The chair was huge, carved with the...stages of woman...The figures, arms entwined with each other, curved along the back and sides of the seat. No cushioning made the hard wood a difficult perch for a woman about to birth. A third woman, Donnia, watched silently. Yet by the gleam in her eyes and the hardness of her lips it was evident what she thought of this foolish ritual.
Yessa, tired of obedience, got up awkwardly, turned around and leaned over the seat with her legs bent. The long finely woven garment she was wearing trailed upon the stone floor, its embroidery trodden. Fortura spoke sharply.
'Sister, you must be seated until the moment of birth.'
'No!' the red haired woman replied, her voice hoarse with pain, ' I will stand.'
'You act like a Half Sister from the villages, Yessa. Be seated! Bear your birthing with dignity. Your offspring may well swell the numbers of our sacred...lines.'
Yessa had had enough. Heavily pregnant and uncomfortable with crampings she'd needed to stand. Turning to seek help with this truculent sister the enraged Fortura left. Once she was out of earshot the Half Sister whispered,
'Quick, Yessa, you are ready. Squat and push before the old harridan returns. It is how any woman with sense gives birth.'

May blogpost - Short Stories
Posted by Rois at 08:14