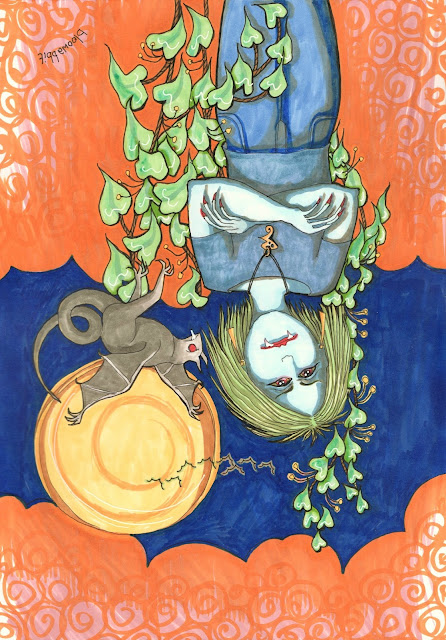 I had seen a challenge on YT where an artist tried drawing upside-down. It occurred to me that this might not just be a quirky theme for a video but completing the challenge might also shed some light on how I perceive shapes in relation to one another. 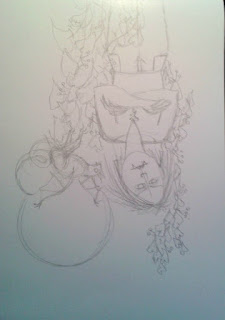 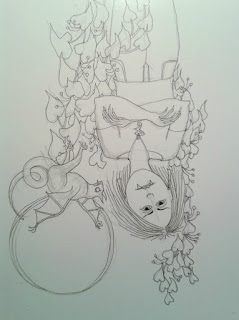 Initially my pencil sketch looked okay, the figure didn't seem rigid and the bat/demon creature (evolved from drawing a fat bat) seemed as though it might add something to the overall composition. I inked the outlines with a unipin fineliner and erased the pencil. 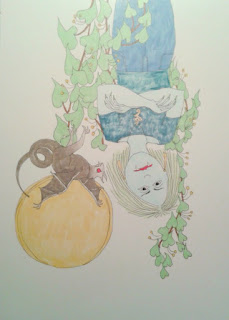 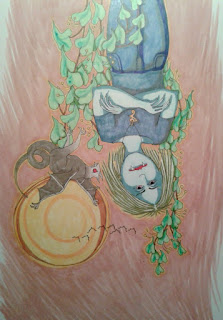 Next I began to add colour. Normally I turn the inked image around, sometimes completely, in order to make colouring intricate areas easier. But in this case I couldn't do that or I'd see the image the right way up. Even when getting up to make a cuppa I covered the image in case I'd see it on the way back. I was sticking to the rule of only being able to judge the image from an upside-down perspective.

I found drawing the hands difficult and had no clear idea if the facial features were in the right proportion. Finding that my Indigo Blue ProMarker was running out I tinted the background with a brownish Dusky Rose flex marker, but I wasn't entirely happy with this colour choice. Using three different green markers I focussed on the ivy leaves, giving them definition and shading. 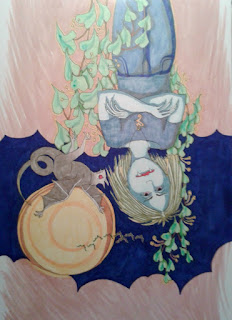 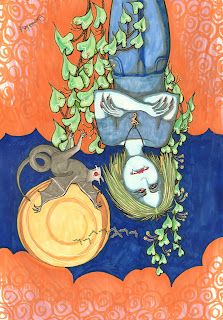 I found a Chafford marker in PB71 blue and created a band of night sky. At this point it was nearly killing me not to see the image rightside-up in order to make more accurate changes. I added a string of bats flying across the moon having first practised their shapes on rough paper - yes, technically cheating but as I got it right first time I forgave myself.

I outlined the vampire figure, the fat-bat-demon and the leaves with the same pen I'd used to ink the outline and used a Bright Orange flex marker to lift the background, adding some spirals. FInally I added highlights on the ivy and also on the figure's eyes with a white gel pen, unsure which direction the dots would make her look. A Warm Grey No5 Copic gave some shading to both figure and bat. And then I turned the artwork the right way up. 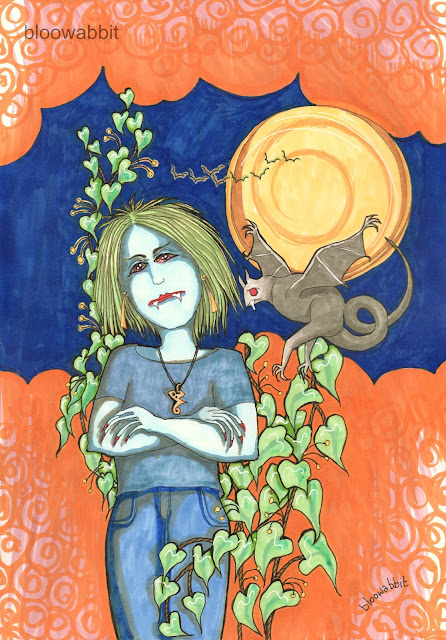 Instantly I could see that the figure's head was too big for her body - something I'd have remedied if I hadn't been judging my drawing upside-down. The body itself is a little shapeless. I'm satisfied with the position of her arms but the fingers are wrong. Highlights in her eyes had given her a wistful look, a happy coincidence. And although the bat's tail needs altering (!) I had got the wings right.

It's an okay piece, fine for having drawn it the way I did. While drawing the outline I found I was continuously translating how it might look the right way up, and the process took a lot longer than drawing normally and was quite tiring. Instead of working further on the piece using coloured pencils I'd had enough and stopped. 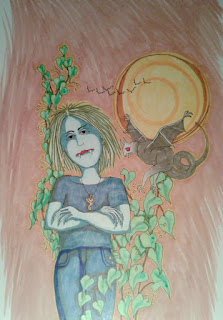 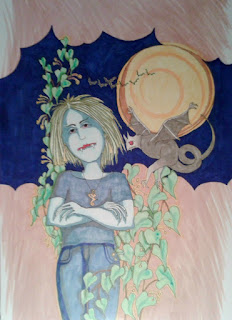 Copyright © 2016 by Roisin O'Hagan/bloowabbitAll rights reserved. The artworks/illustrations or any portion thereof may not be reproduced or used in any manner whatsoever without the express written permission of the artist except for specific permission granted with a free downloadable.
Posted by Rois at 07:19