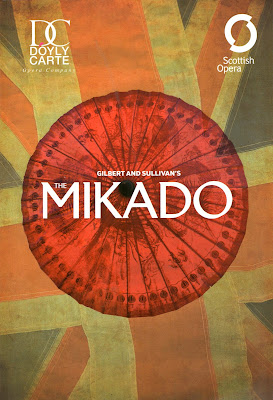 Last week I attended the Mikado at the Opera House in Belfast. The outing was my uncle's idea and it interested me as I remember the Mikado being the first Gilbert & Sullivan operetta I'd seen staged at my old school. Every four years a G&S production was presented on the school stage over a few evenings before Christmas and although I only ever played an Arcadian youth (all girl's school) in The Arcadians, I did help with scenery painting in my senior years.

This Mikado production was a collaboration between D'Oyly Carte and Scottish Opera. I've seen Scottish Ballet before and they're a favourite dance company of mine, mixing traditional with innovation. Scottish Opera proved no less inventive. D'Oyly Carte is the historical Opera company which promoted G&S works. 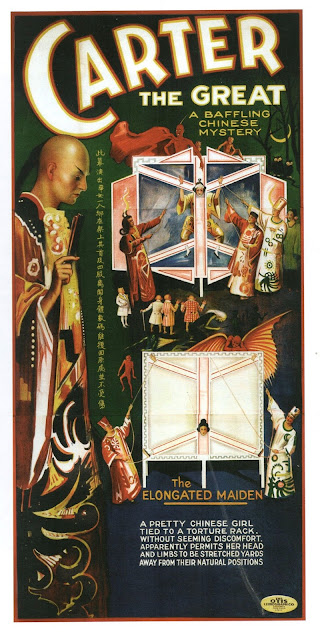 The curtains opened to a late C19th, early C20th conjurer scene that wouldn't have looked out of place in the Savoy Theatre when and where D'Oyly Carte was at its heyday. The act goes wrong and the conjurer adds the head of the unfortunate volunteer to a macabre collection of other heads on plates who begin the opening chorus.

Humour carried through the operetta, not only in the words of Gilbert but within the singing and the acting. I felt that the company thoroughly enjoyed every moment. If this was an illusion it was very well done. 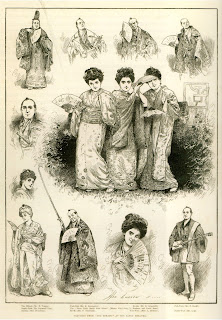 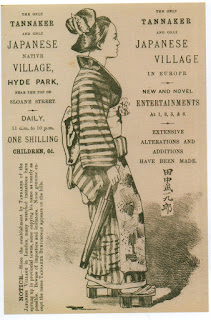 'The Mikado at the Savoy Theatre, London, sketched by H Ludlow,
The Illustrated London News, 4th April 1885' and
'Advert for the Japanese Village at Hyde Park, London,
which ran from January 1885 to June 1887.'
Mikado programme, 2016 Scottish Opera

In short, the story is a mix of love, fear, retribution, class, intrigue, lies and truth. The main characters are Yum-Yum, a schoolgirl old enough to consider marriage and a wandering minstrel called Nanki-Poo who turns out to be the Mikado's son. The Lord High Executioner, Ko-Ko, is at first a scheming and selfish man who by the end saves the lives of the young lovers. There are many more twists and turns in this comic operetta. Towards the end Rebecca de Pont-Davies played a wonderfully ghoulish Katisha, the character's personality reflected against the skeletal scenery and in contrast to Richard Suart's clever comedic Ko-Ko.

Costumes were wonderful, a mesh of Victorian music hall with traditional Japanese dress. Pooh-Bah, the official with many superfluous titles, wore a bowler hat with added crests, a tailored jacket beneath a montsuki (short kimono) and tucked into a full pinstriped hakama (skirt). Throughout the production was the 'topsy-turvy' quality of the Mikado's setting, Tiptu, being a very Anglicised 'Japanese' world. And in true operetta/pantomime form, one-liners were woven into the script, at the expense of major politicians and to the delight of the audience. 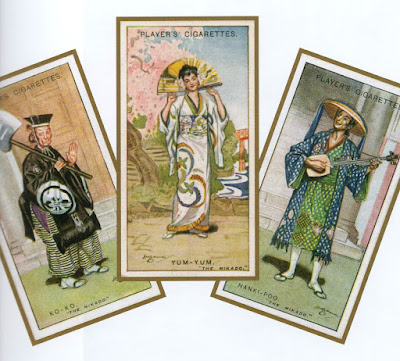 I find myself humming 'Three Little Girls' a week later. I would have liked to go back and see The Mikado again as it was so filled to bursting with quality performance and imagery I could not possibly have taken in all of it. If you like the work of Gilbert and Sullivan it's one not to miss.

Copyright © 2016 by Roisin O'Hagan/bloowabbitAll rights reserved. The artworks/illustrations or any portion thereof may not be reproduced or used in any manner whatsoever without the express written permission of the artist except for specific permission granted with a free downloadable.
Posted by Rois at 07:43