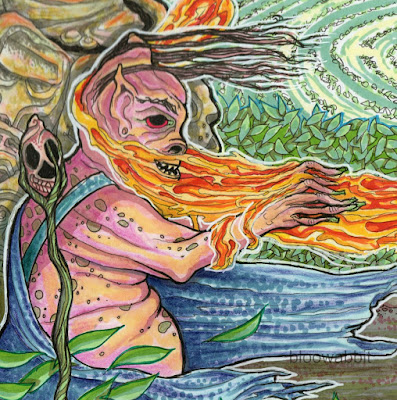 One of the YT artist channels that I subscribe to is Draw with Jazza, hosted by an Aussie with a very definite illustrative style. He promotes a site called Newgrounds and runs competitions with them and as the first prize of the current competition is a Wacom Intuos Pro tablet I thought I'd enter...if you're not in you don't win. Jazza runs a shop and it's worth having a look - I recently purchased the Anatomy Reference Pack which is great for that pose you want to draw and don't want to be taking selfies.

For the art competition...
Each entrant had to choose a character:
And a setting:
My instant preference was the orcish wizard in the maze with the altar. (Slightly Cluedo-ish, that). It must have been all those nights playing Dungeons and Dragons. 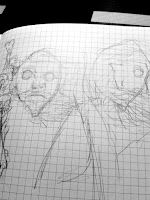 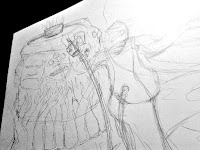 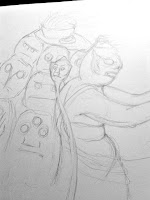 Pencil sketches, trying to get a feel of what the orc, his staff and the altar look like. 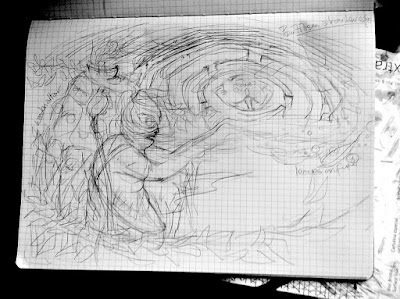 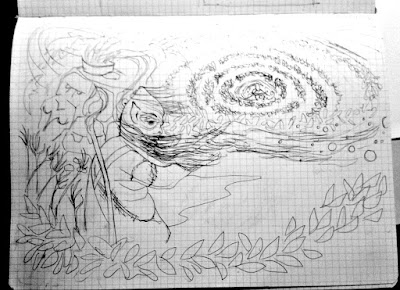 The orc sorcerer needed to be the focal point yet I wanted to see the maze, so by tilting it I achieve that plus it gives a sense of valley and hills. As the character was described as having a beard I got a little inventive, making his beard a transient growth of fire. At this stage I wasn't sure what was in the centre of the maze but knew that whatever it was it was affected by the magic emanating from the wizard.

As I worked at the drawing subtle changes happened. The top of the wand became a small skull, possibly a lesser orc, and the wizard's flesh became mottled and spotted. The altar of carved demonic faces leaned to one side making it necessary to draw a stone under one edge of the sacrificial bowl on top - that's what someone would do to make it level. The more you draw something the more you get to know it and the more its story unfolds. 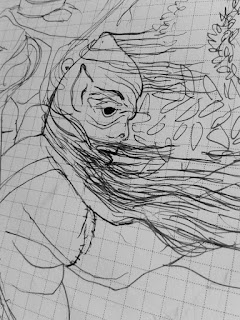 Inking the 2nd layout.
He just had to have that sweep-over hair which is caught in the wind... 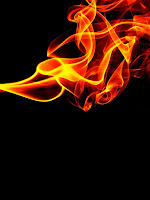 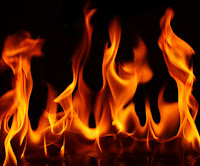 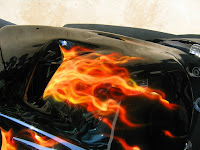 I looked at fire images online to get a feel of how to draw and colour the flames. My son suggested I watch videos of flames and he's right - by watching how something moves you get a sense of how it's made. 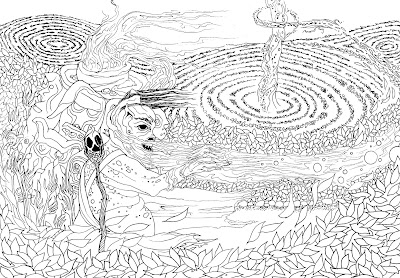 Inking up the finished version was very intricate...why did I choose to draw leaves? !! But a leafy maze was what was in my head. Branches ending with twiggy fingers surround the base of the altar and echo the wizard's staff. I quite liked the manic grin of the small skull. Perhaps it has a life of its own like Bob the possessed skull from The Dresden Files. 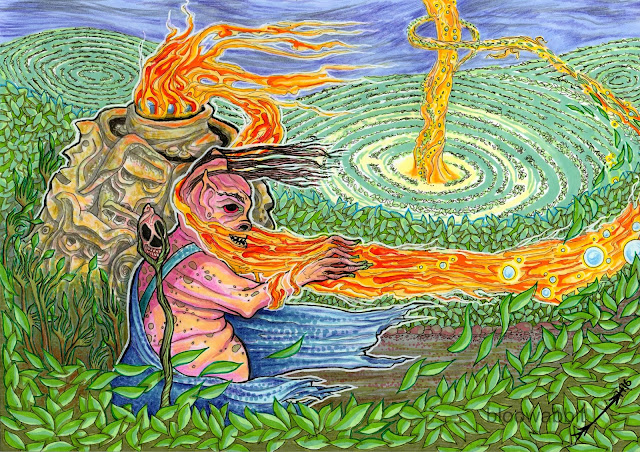 A base layer of Copic, ProMarker and Chafford markers with some finer detail followed with my vintage Mars Chroma coloured pencils by Staedtler. Used a black UniPin fine line I defined the staff, orc & altar and popped them and the beard of fire with a line of white UniBall Signo. I also used some coloured gel pens to define the top of the hedges and the branches surrounding the altar. 'Amazing Orc and the Beard of Fire'...

Thoroughly enjoyed this challenge as it's always good to work on something different from my usual themes. Fingers crossed then, I've been eyeing up the Wacom Intuos to try some digital drawing.