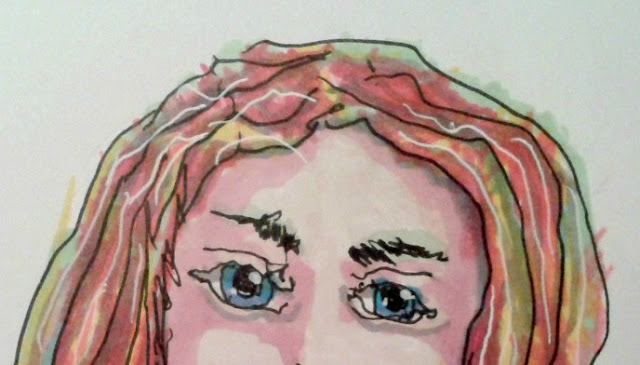 I had been reading about people who can write/draw with both hands while each hand writing/drawing results in a mirror image of the other. And I reckon most people know about Leonardo da Vinci writing freehand in a mirrorscript. I began wondering what kind of an image I'd get if I drew using a mirror and only looking at the mirror whilst drawing. 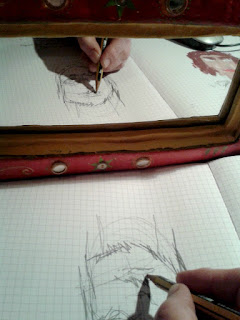 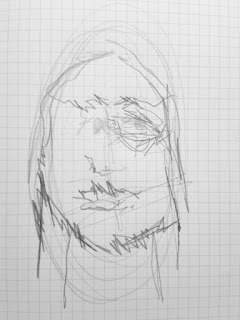 It was easier to draw from the reflection without visual distraction if I held a piece of card over my right hand. Any mark I made on the paper was the opposite of how it looked in the mirror. Although I was looking at the reflected drawing the correct way up, in reality I was drawing it upside down. 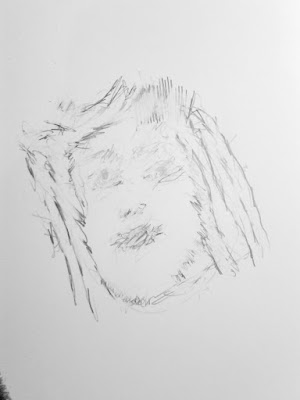 Drawing a curved or straight line from upper left to lower right was the most difficult. It was easier to shade an area and then erase until a fine line remained. 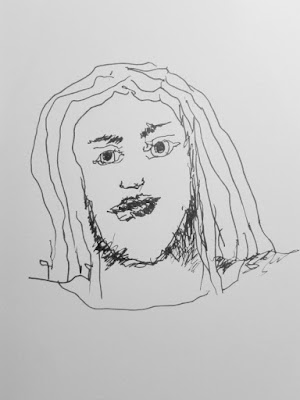 The shape of the face appeared very distorted after inking, the mouth oversized and off centre. Trying to turn a very rough chin line into shading resulted in it looking almost like beard or sideburns. There was no movement to the hairlines, drawing them curved took a lot of concentration. 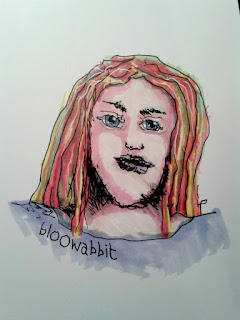 The image on the left is the actual drawing, created upside down, while the image on the right is what I saw in the mirror the correct way up. I used a mix of copic, flex, promarker and chafford markers, finding the flexible brush ends the easiest to manoeuver.

The challenge was more difficult, took much more concentration and the result was more inaccurate than I'd thought it would be. As I looked into the reflected image in the mirror I found I was attempting to draw a line but that my usual thought process combined with mirror resulted in a line going an entirely different way.

Want to try this again sometime to see if practice would improve my translation of thought to movement.

Copyright © 2016 by Roisin O'Hagan/bloowabbit
All rights reserved. The artworks/illustrations or any portion thereof may not be reproduced or used in any manner whatsoever without the express written permission of the artist except for specific permission granted with a free downloadable.
Posted by Rois at 13:53