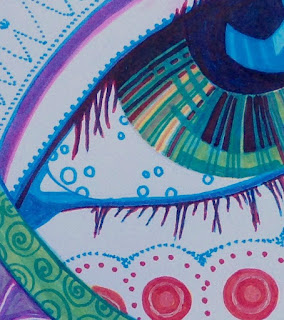 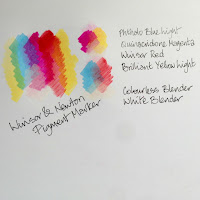 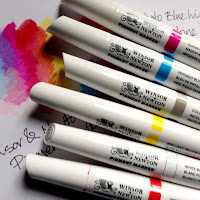 I started out with a small range of Winsor & Newton pigment markers plus a white blender and a clear blender. There is a lovely transparency to these markers and they overlap well. The clear blender seems to dissipate the colour similar to copic blenders. The white blender turns the marker colour into a tint of the original however using it on top of damp pigment marker tends to agitate the surface of the paper. For this test I'm using Bristol Board. Check out Using Colour Theory for more info on shades, tints and tones and using primary colours to create other colours. 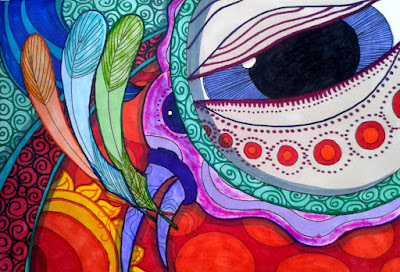 The doodle I chose to redo in pigment markers is of a large eye, bird and feathers. I felt the colours I had in the pigment markers could be mixed to create the purple and green and orange. I've been wanting to practise inking eyes as I feel my current style is simplistic. 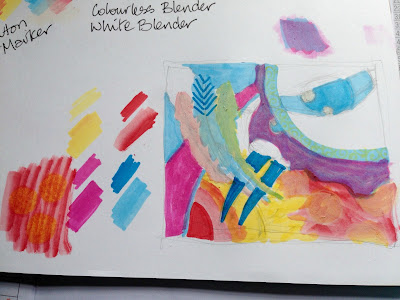 Tried out a little pre-redo (is that a word?), a thumbnail, and am experiencing how these markers work. I recommend doing this before launching into the final piece - something I often am too impatient to do! Perhaps I should start a sketchbook just for trying out different mediums as it would be a good record I could refer back to. Some of the markers seem darker at one end than the other which might be down to my storing them vertically rather than horizontally.

Invested in an A3 Bristol Board sketchpad - Bradbury Art had a sale! I intended doing a version of the doodle in the centre of the sheet leaving quite a lot of white around - there was something about the thumbnail against white. But before I realised it I was working on the entire sheet so the finished image is now A3.

Did a little bit of researching how an eye looks up close and it's okay, have added a few extra effects to it. Changed the bird quite a bit, again after doing some visual research. The feathers have become smaller and more realistic and the sun is softer, more impressionistic - almost like a flower. 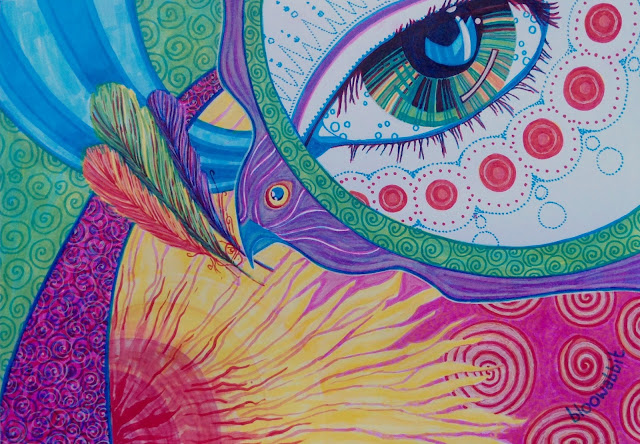 The range of tints and tones by overlapping these markers was good and the results didn't get muddy. The darkest colour in the eye is from overlapping the blue and adding red and then blue again on top which gave a dark purple-blue, redder than indigo, meaning I didn't have to use black at all. I did use some white gel pen to touch up the small white areas in the eyes and also to outline the bird and add highlights to the feathers.

The surface of the page was roughened in a few spots but I think this is due to impatience on my part, not waiting until the colours dry before reapplying. I'll certainly use this type of marker again because of the vibrancy of the colour and the clarity of colour even after layering.