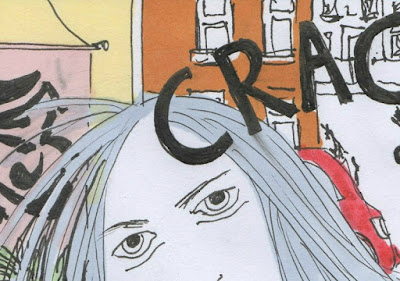 This week's course videos were interesting - the tutor spoke about how an artist can convey time and space within panels, outside panels and between panels. We also got to watch an interview with a comic artist, Chuck BB, while he worked, as he described on what and how he was working. This was more than learning theory on a course.

I'd once watched a conversation almost develop into a verbal fight between a writer and a comic artist as to which had the more impactive role. I sat at the workshop table, my glance moving from one to the other like the ball in Pong. I was guilty of asking the question, 'Does a comic artist think they're more important to the comic than the writer and vice versa?'.

In the interview Chuck BB was asked if he prefered the writer sending him the storyline in full scripts or in Marvel style (paragraph or two about what's happening on each page). And he said somewhere in between was good. While the latter gives him more freedom to decide what visually goes into the comic, having a script writer can be okay as long as there's the opportunity to negotiate possible changes. I got the sense this comic artist was flexible and very sure of his worth which in turn made me think about the conversation that had got out of hand. 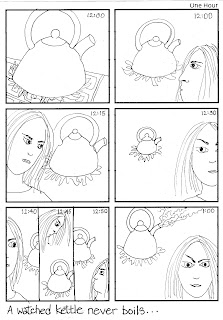 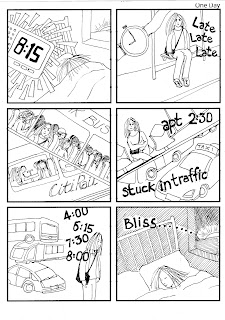 This week's assignment was to make three single page six-panel comics. The first had to portray the message happening within a second. The second page within an hour and the third page within a day. This was about exploring Compression and Decompression. 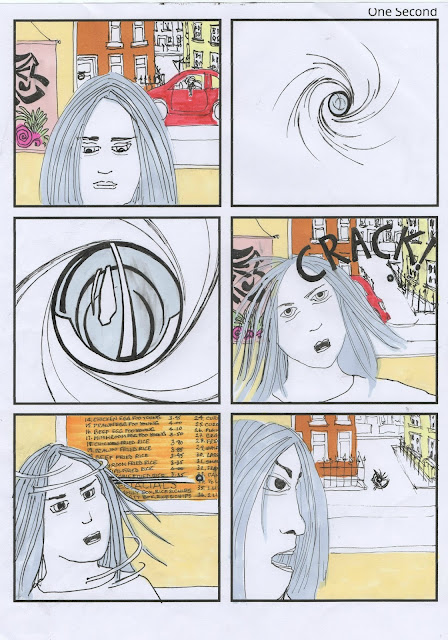 I had left the assignments until Sunday so the drawings are a bit rushed. I found 'A Second' page easiest as it was something that had actually happened. Sitting in a Chinese takeaway I heard a sharp sound. Turned out some lads driving past with a Bebe gun had shot at the window beside me leaving a tiny hole in the glass. The other two pages are more contrived, 'An Hour' is based on the saying 'a watched kettle never boils' and 'A Day' is based on how travelling is what fatigues me the most. The day begins and ends with me in my comfortable bed. I was happy with the alarm clock effect and using some colour in the panels helped diminish the busyness of the street.

Copyright © 2016 by Roisin O'Hagan/bloowabbitAll rights reserved. The artworks/illustrations or any portion thereof may not be reproduced or used in any manner whatsoever without the express written permission of the artist except for specific permission granted with a free downloadable.
Posted by Rois at 07:40