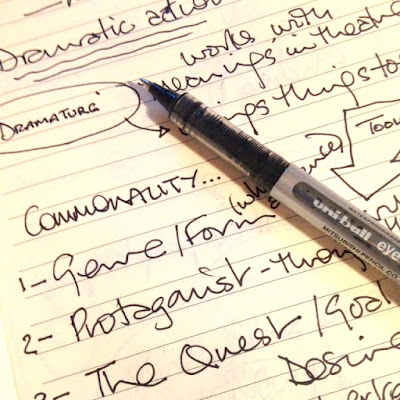 A Swedish dramaturg called Hanna Slattne held a script writing workshop for Bounce! arts festival. We were a motley crew gathered, creators of poetry, short story, performance and film. All interested in developing a different facet of writing to hone our own skills.

Hanna explained the difference of script writing, that it wasn't a literary exercise but one that 'tells a story with action'. So, all the efforts I take to conjure a short story were of no consequence here. When we'd been taught the basic toolbox and set a group task re-writing the story of Little Red Riding Hood we were then set a personal task. To script write the 1st scene in our story.

I had to begin the task three times before being able to drop my usual short story process. And this is what I came up with...

Lily is lying awake in her truckle bed at the foot of her parents' bed. They are asleep in the dark, her mother breathing softly, her father snoring. Lily is fully dressed and wearing her red cloak beneath the covers. She arises slowly, trying not to make her bed creak. She stands and looks over to her parents.

She moves slowly to her mother's side of the bed and slowly begins to slide her hand below her mother's pillow. With every exhale in her mother's breathing she slides her hand a little further, bit by bit until her hand touches the keys. Curling her fingers around them Lily slowly retrieves the keys in the same way. Her father snorts and her mother turns in her sleep towards her daughter.

Lily holds her breath until she's sure both parents are still asleep, grasps the keys tightly in case they rattle and moves away from her parents' bed. She bends down to reach her backpack from below her own bed and quietly leaves the bedroom.

She tiptoes down the stairs in the darkness missing the steps that creak and makes her way to the back door. She finds the key that fits and slowly turns it in the lock, tensing at the loud sound in the silence. She stands still, listening until she is satisfied that no one stirs upstairs.

The back door is now open and Lily is free. She quietly closes the heavy door, slips the keys under a plant pot and hurries down the path.

The moon is bright so she stays to the shadows of the houses along the street, running when the moonlight breaks her path. She hears the strike of a match and stops, holding her breath.

In the shadow of the house ahead stands the woodcutter. He's watching her, his eye is lit by the flame.

Lily stands in fear, looking at him. The woodcutter inhales his lit pipe.

WC: She'll not thank you for waking her at this hour. Or do you mean your other grandmother?

WC: No change in your father then? We all miss her. But you need to bide by your father's counsel. Go back to your home.

Lily's eyes have filled with tears but she stands her ground.

L: I'm going. If you stop me I'll just go again some other time.

The woodcutter puffs on his pipe staring down at the girl. He sighs and spits on the ground.

WC: I'll walk with you. No young girl should walk through the forest alone. There's a beast that hunts there. He'll have you in a single mouthful.

The Woodcutter bends to lift a large axe. Lily sniffs, wipes her eyes with her sleeve and follows the man towards the forest edge.

I felt the approach was a more informative way of writing a story. It is about how I tell the story but contains nothing of me or my emotions in that telling. Once I got into the rhythm I found it straightforward although when I re-read it today I did edit it, losing anything that I felt was unimportant. I daresay a seasoned script writer might edit it further.

Arts & Disability Forum (ADF), the charity behind the Bounce! Arts Festival, may well be holding more of these workshops. I hope it does - I'll be signing up for more.

Bloowabbit facebook page
bloowabbit Instagram page
Copyright © 2016 by Roisin O'Hagan/bloowabbit
All rights reserved. The artworks/illustrations or any portion thereof may not be reproduced or used in any manner whatsoever without the express written permission of the artist except for specific permission granted with a free downloadable.
Posted by Rois at 05:45