Four Bunnies of the Apocalypse - redo 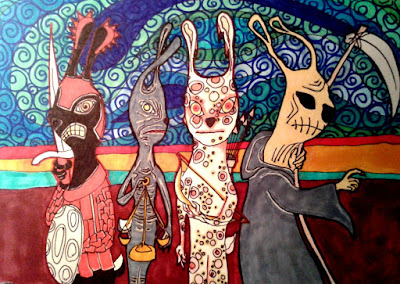 I had been drawing a lot of different genre last year, bunnies included. So when I saw illustrations of the Four Horsemen I in turn created Four Bunnies of the Apocalypse. No doubt in some other wabbit universe they may well exist in the pages of bunny doctrine. I liked some of the doodle, Pestilence in particular, but I felt that the others needed a lot of work. Plus, I didn't like the background at all. 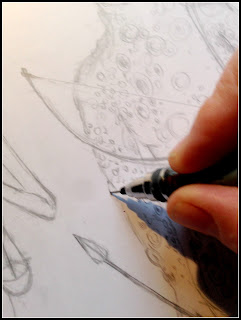 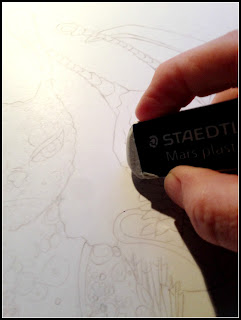 At a sale in Bradbury Art I picked up an A3 Bristol pad - this piece was going to be twice the size of my normal work, epic proportions. Loading the doodle version on my laptop screen from which to work and listening to the 6th series of Star Trek/Deep Space Nine I began to sketch. The bunny figures would remain in the same positions although I added a little more depth. 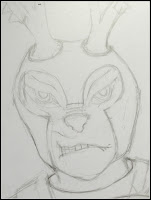 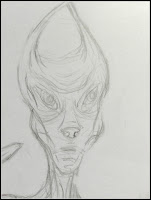 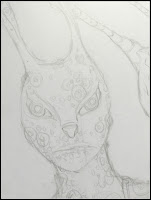 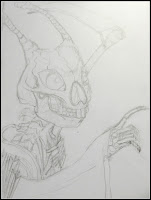 War and Pestilence stare at the viewer. Famine and Death look to their left, Death extending his hand as though to mark someone or something off page. I researched the four words war/famine/pestilence/death so that I could base this fantasy upon reality. Researching this was difficult and I became very aware of these four things being part of our modern world, not things that have faded into ancient history.

War's ears are stockier, blunter than those of Famine's which are more wispy, almost insubstantial. With Death's skull I used a lot of artistic licence, his ears are skeletal and his two front bunny teeth are evident. I'm glad War has a large round shield - every opportunity to hide arms and hands should be used. 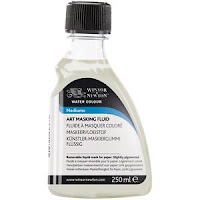 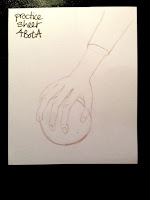 Brown pencil outline. Having tried out some Letraset inks I wanted to use them for the background but as they had been tricky to work with I decided to block out the figures with masking fluid. Just in case the fluid lifted the brown pencil I tried a practice piece and I'm very glad I did. I'm not sure if the inks alone seeped under the masking fluid or if the masking layer was too fine or if the dispersal agent I sprayed was the culprit but it resulted in an utter mess. Plus, the mask tore the surface of the paper. 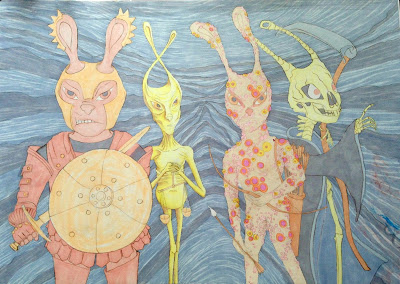 First layer of colour, mix of Copic Ciao, Letraset Promarker & Letraset flex. Overlaid colours in background (which would have been easier if I could have masked out the figures) and will work further on that with Copic blender refill and a range of blues. 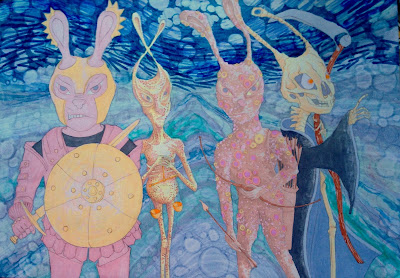 More layering of colour and darkening of Death's cloak. The Copic blender refill had arrived so with drops onto the paper and also using a fine paintbrush to apply circles of blender I altered the background to look less like banding and more organic. I didn't like the lines of dark blue but when I tried knocking that back with the blender I realised I'd used Letraset Aqua Markers which weren't alcohol based and didn't react to the blender. I decided to overlay alcohol markers and hope that by working on them with the blender fluid and a paintbrush that the lines might then look softer.

Finally I outlined the figures in black fineliner 0.1 unipin and added some pale grey shadowing. I used a uniball Signo white gel pen to lift the edges. I also added some white gel pen in swirls to hide those dark blue lines but it just looked wrong, so I went over them with a Letraset flex marker in Pastel Green which diminished them. It's finished but I'm not sure about it. Doing the background without masking off the figures was difficult - as I was working on A3 sized paper I couldn't scan the line drawing into my laptop as a back up. Perhaps I need to think about a larger scanner. 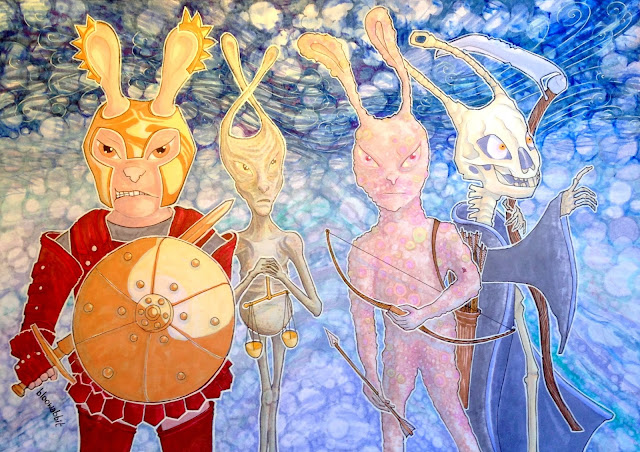 Too much time passed between completing the drawing and working on the colouring. I found some impetus had waned. Really pushing myself enabled me to finish the piece. I felt that Pestilence looked too pink but I couldn't bleach him any more than I tried with the blender fluid. And to be honest, Death's eyes look like fried eggs and War's boots look a little camp. I may work on this again in the future as I like the idea.