One way to design and create a stamp is to make it yourself. I make stamps by carving plastic erasers. The finished eraser prints with a handmade look and it's obvious these stamps haven't been machine cast or pressed. Those times when you're elbow-deep in card making or journaling and you need a specific design then eraser carving can be an answer. And while it takes a little patience it's also a lot of fun.

I was looking for a Halloween stamp, I have a few bought stamps already, but I wanted a specific image. I had a very large plastic eraser (Dunnes stationers) which was perfect for a more complicated image of witch, cat, bat and spider. The smaller the eraser the more fiddly it is to carve so the more suitable it is for a simple shape. 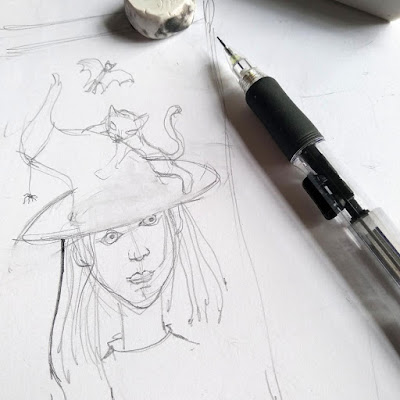 First I sketched the image I had in mind. It's also possible to trace a photo as a starting point. 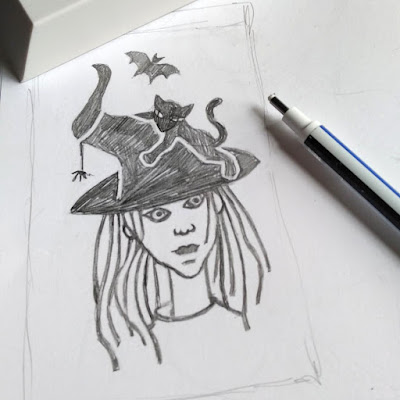 Then pencil in the black areas (the areas that will be left after carving) and touch up by erasing any unwanted lines. I added and criss-crossed lines (like the hair) so that they had more of a chance of staying stable after cutting. 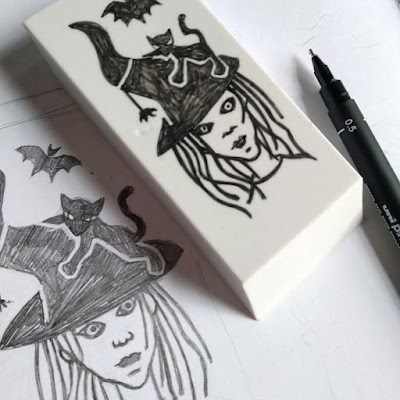 Transfer the drawing to the eraser using fineliner. At this stage there's still time to tweak the image before carving. 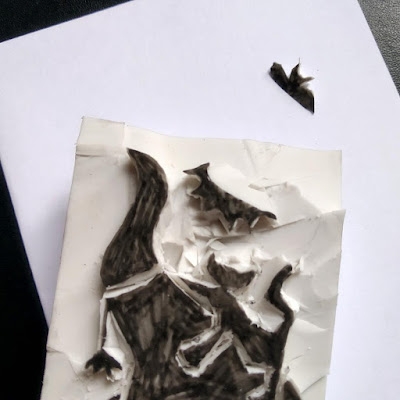 Using an exacto knife I began to cut away the parts that remain white. I should have taken a break because I was losing focus towards the end of carving and my hand slipped. The top of the bat was cleaved off. Found the tiny piece and glued it back. Wasn't sure if this would work but knew during inking I'd find out. The cat's eyes were too small to cut so I altered the shape of its head. And the witch's eyes were only going to work if I cut the entire eyeball out and added pupils with a fineliner after printing. 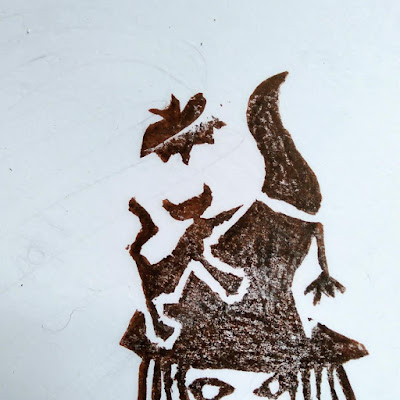 Using a brown ink stamp I inked the eraser stamp and tried a first print. What was obvious was that the bat was damaged beyond saving so I cut the bat out of the image. Other marks show up in the first inking indicating where I needed to trim the image. 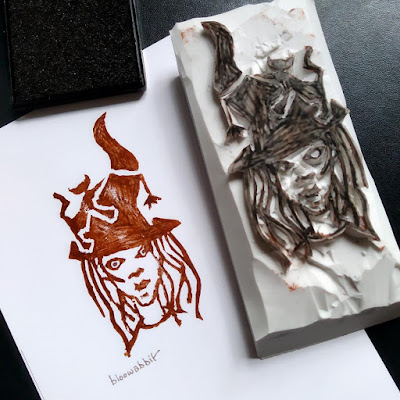 The final result is a stamp with a woodcut-ish style. I love the angular cuts and the texture given by the eraser surface both which greatly change the image from the original pencil sketch.

All rights reserved. The artworks/illustrations or any portion thereof may not be reproduced or used in any manner whatsoever without the express written permission of the artist except for specific permission granted with a free downloadable.
Posted by Rois at 11:56